Thessaloniki has been the crossroad of nations and cultures throughout its long history. Named after a princess who was half-sister of Alexander the Great, the city was one of the first Christian centers in Europe. It the past, it was the city of the Romans, Byzantines, Greeks and Turks.

Also known as the “bride of the Thermaic Gulf”, Thessaloniki prides on many attractions. You can sit and relax in its many cafes, have delicious food at traditional taverns and a lot more.

Don’t miss to take a walk along the seaside promenade, the longest one in Europe. Or take a carriage ride at sunset for a romantic experience. When the sun goes down, enjoy great nightlife.

As you get around, you will perceive the multicultural character of Thessaloniki. There are a few attractions that will take you back to the Roman era. Take a look at the Palace, Rotonda and the remains of the Triumphal Arch. These are good examples of the city’s status under the reign of Galerius Maximilianos.

Near the Rotunda is a former home of Mustafa Kemal Ataturk. Today, it is the museum devoted to the founder of the modern Republic of Turkey who was born here. The museum is a part of the Turkish consulate.

Another important point of interest you should visit is the Jewish Museum. The museum recreates the way of life led by the members of this community before WWII. The touching display elaborates their extermination by the occupying Nazi forces.

If you head north, you will soon leave the modern area and enter Ano Poli, the old part of the city. Climb the Trigoniou Tower, the historic stronghold, and enjoy the views of the city and the sea. More so, take a closer look at the Eptapyrgio Fortress. The structure features Byzantine and Turkish elements.

While you are about, you will also come by Ottoman monuments and Byzantine churches. Some of the latter are churches of Agios Nikolaos Orfanos and Hosios David. The Hosios David features well-preserved mosaics and frescoes. Finally, don’t miss the Vlatadon Monastery, the UNESCO site.

After all, ask someone to take a photo of you by the White Tower. The landmark is the symbol of the city, located on the seaside promenade by the Aristotelous Square. 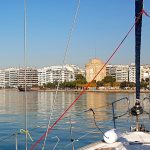 Sail away and enjoy summer safely

Learn more about COVID-19 and Sailing